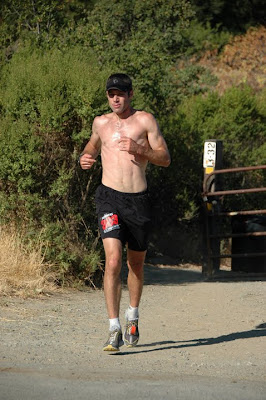 After a few months of transition in the move to Nor Cal this summer, I have found a bit of time to slot in a couple of races. After Western States, I needed some time to decompress and let that 100 mile bug drift away for awhile. I sincerely wasn't that bummed about my result there. I put a ton of focus on running well at Western, maybe more than any other race. I am happy that I have reached the point in my racing where I am able to control most variables of my racing, yet I realize that sometimes there is nothing you can do about unforeseen or uncontrollable variables in ultrarunning or adventure racing (it's not like I am adventure racing now anyway). Getting a summer cold before Western was one of these variables that just happens. Oh well.. give it your best and move on. I feel like I left everything I had out there on the WS course but was too drained to follow through after the first 55 miles. Maybe next year...but if I never run 100 miles that is fine with me. I am not as obsessed about the distance as most 100 miler runners are and can easily let it go if it comes to that.
So anyway, the first race back was the Bear Creek Canyon Half Trail Marathon, back in the beginning of September. This was after the first week of school, and with luck, two other of my classmates at Touro and I found ourselves with the gift of a light weekend of studies. I took this opportunity to contact Sam at Brazen Racing to run his half marathon in the hills just east of the Bay Area, near Pinole.
This race was chill; not competitive in the least, but super hot in the physical sense. I didn't think this race would be competitive, but competive or not I just wanted to run a good effort somewhere as I hadn't done any serious races in a couple months. (I forgot though that the day I drove out of Colorado, I ran the Georgetown to Idaho Springs Half Marathon as a tempo run..)
The Bear Creek Half was 90 degrees on the course at the start and 102 at one time according to Sam, the RD of Brazen Events. I went out a pretty low key, comfortable pace, and in 30 minutes knew it would be a day running solo. The next while I had a nice time cruising through the hills of the East Bay, checking out new terrain and views and giving a good effort. The course was one big loop, the second best layout of a course after a point to point. New stuff to see all the time in a new place, not too far from where I'd be living for 30 months. The temperatures fooled me though, as my unstated goal of a 7 minute mile pace with about 3600 vertical went out the window as mile 9 approached and the heat started to take it's toll. I finished in a respectable 1:40 and change for the day, and got a gift cert for a free pair of shoes from the local Fleet Feet stores, which I promptly gave to my wife, Ellen, like any good runner boy would do (thanks for giving me the hall pass, Elle!) Sam the RD put on a good race with many of excellent organizational details that make for an excellent event.

Three weeks later, fast forward to yesterday, I partook in the Santa Cruz 50 trail race. At this point I think I'll jump to the "lessons learned" section of the monologue;

2) Take with a grain of salt what other racers tell you when it comes to course directions; everyone's hypoxic out there.

3) Listen to the pre-race briefing!

4) Sometimes the RD is even wrong!

That said, take what wrote about how I have learned to "control variables" and toss it out the window!
So, I cruised to Santa Cruz later Saturday evening, after getting Ava to bed, and crashed out in a Santa Cruz hotel to get a dcent night rest. I woke up early to do my usual two-hours-before-racing-warm-up jog, ate bananas, some coffee and water, then T Footfeathers showed up on his crotch rocket Ducati at my hotel (freezing cold too; his fingers were literally white-knuckeled), we loaded into my old Subaru and headed to the start.
After not paying attention to the RD give his speech (see 1st mistake) and thinking I knew the course and foolishly assuming, like most races, that there would be course marshalls at critical junctures of the race I started off. The lead pack of four quickly turned into Tim, two other races who were running the 29k version of the races, and me. I felt in the groove and was running well, keeping pace comfortably with the 29K runners, and for some reason it seemed like everyone was pacing off me. I have a bad habit of trying to run every tangent (straight-lining to every corner up ahead), so in a pack running situation it may seem to others like I am trying to cut them off. This isnt the case though, as I try to run my own race pace, but I must run the tangents because to do otherwise is really foolish and I'd end up racing further than I need to race. Makes sense, eh? So if you see me cutting you off in a race don't take it personally. Cool? Cool.
So anyway, since I need to get to bed, I am going to cut to the abbreviated version of the race. At the 8k or so point in the we come to a turn that is flagged in two directions. I thought this was the side loop we were supposed to add to the out and back (kind of like a intestinal hernation, only on a trail race) and thought we should take a right tuen onto the side 7 k loop The one 29 k dude said Yes that is correct and the other 29k guy did the same, so off we went. Off we go, we run the very nice 7 K single track herniation, and back to the main out and back section. Uhhh.Oops. Here are dozens of runner sat this intersection running the main out and back, and we three knew we'd fubar-ed the run. We keep going as a threesome to the end of the out and back aid station, took some aid and headed back. It's complicated to describe this course layout and what we had run, but on the way back to the start/finish turn around, I reckoned I needed to keep racing and clarify with the RD as what to do next to rectify my error.
At the turn around, I asked the RD, Wendell, if I could run the steep 1K section near the base of the loop to correct my running error and make up the distance I had missed. "Yes, that will work." Cool..game on, lets keep racing. So I turn around, turn it up a notch, still feeling good, run all the way, about 10k, back to the far aid station in about 43 minutes, come back, re-run what I thought was the steepest section at the base of the loop, and bust it back to the finish in 3:38. Awesome, I thought! I ran a fast 50k and felt like I could do it again right then and there! Got my simple award mug and drink coaster prize, talked with the RD and a few folks at the spartan finishing scene, jogged a mile cool down, Tim and I hooked back up, and back to the Subaru.
As Tim and I rehashed the race day, I told him about my snafu in the course, how I'd neatly corrected my error mid-race, feeling all proud of myself. Luckily for me he told me that I was supposed to go all the way back to the aid station for a third time to correct my mistake. Darn!
With that I turned the car around, went back to the start, told Wendell how we had screwed up our miscommunication in mid-race, gave my mug back (kept the coaster though), and got back in the car.
Whatever, I say.. besides not setting a course record, I had a good time, loved the course terrain, redwoods and the four waist deep river crossings (I could do definitely without four out and backs though), and gave good effort and feel fit. The upside is that this fall now I feel obligated to find another ultra to make up for it!
Posted by Dave Mackey at 9:30 PM 13 comments: