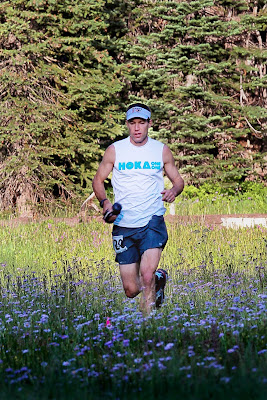 The one meadow crossing at Waldo, and it was quite lovely.

For several years I’d been eyeballing what used to be called the Where’s Waldo 100k as a top trail race to experience in the Northwest. I’d only tromped one Northwestern race in 2002 and should have been up there sooner than now. I suspected that Craig Thornley would put on a good show, and the fact that Waldo used to be the USATF 100K trail championships indicated this would be a high quality experience. Oddly enough, only a handful of top elite runners have made their mark up there, whereas White River 50 and Chuckanut, the other top NW ultras, had seen the gamut of elite runners. In coming years I am sure there will be many others making the trip. If you are on the fence, I would recommend Waldo 100k any day.

Scott and Clare and I camped out in the parking lots of the Willamette pass ski area in Scott’s sweet camper van (remember the band Camper Van Beethoven and that song matchstick men? I do.) We awoke at 2:45 with the 3 am starters walking walking by to start their race early, then crashed for one more hour or so to wake for the 5 am start. I was concerned that the 5000’ start base elevation of the ski area, and the race low point, would affect my race, but I found comfortable uphill running until about 6500 feet during the race, then felt a bit slower above that. The first climb is on the only dirt road of the race, about ½ mile of that, then onto 62 miles of pure singletrack for the rest of the course (besides one very short section); you just can’t find races like this anywhere anymore, and oddly enough I actually got tired of singletrack later in the race! I’ll take that kind of boredom any day.

The first 1200 ‘ climb I felt very comfortable uphill running and was happy that I had put in a lot of vertical training in the prior month back in Marin. My trespassing onto the 1800’ electromagnetic tower hill for hill repeats in Novato had paid off, and I felt that the first hundred feet of the race that I would be tough to beat that day. Given how crappy I felt at my last ultra, an unknown Sierra trail run that rhymes with “blistered face”, I was happy to feel good. As I started down the first of many sweet descents on classic long switch backs where you can get sub 6 minute mile leg speed, I glanced back and didn’t see any headlights bobbing through the trees, but knowing that Ian Sharman and Yassine Dibboun were racing, I thought they’d be close. I knew that these guys had ultras raced a bunch lately and guessed they weren’t focusing on Waldo.

My intended splits were taken from the stellar Craig Thornley Waldo website, with a pacing plan exactly what Erik Skaggs ran in 2009. I came into the first Fuji mt aid station at 59:30, just two minutes below Skaggs' split. Through the big trees to the top of Mt Fuji I kept passing the 3 am early starters until I topped out and had a quick view of famed Waldo. Waldo is named for one of the many large lakes around the course, but you never actually see Waldo until the top of Fuji peak if you think to look for it; I didn’t see it for long, but for doing so the organizers gave a lovely Patagonia down jacket in my wife’s size anyway for be the first to be able to view Waldo.

Tagging the summit at 7100 or so feet, and turned around for the semi technical but fast descent. I passed the guys who were headed up in 3 minutes, so I reckoned I had about 7 minutes on them, but Ian later said I had 10. Anyway, back to Fuji aid station, came through at 1:44:35, still just slightly faster than Erik.

Throughout the rest of the race, I was about 1-4 minutes on Skaggs’ splits, and while racing I recalled reading about his race from two years ago, when he developed rhabdomyolysis. I hadn’t reread his post-race interviews since then, but should have, as I wasn’t sure how much NSAIDS he had ingested at the time. I decided to only take 1 x 220 mg of Naprosyn early in the race, and one more later, which is conservative for my racing style; I know many medical professionals and some racers think NSAIDS do nothing to help one’s racing, but I think otherwise as long as the runner is very conservative, hydrated, and fueled.

Since I felt consistent the whole race with only a small lull at near Charlton lake aid station, I decided to not push the pace beyond reason; I had zero desire to experience the hospital stay that Erik endured. I did wonder though if his pace would slow later on in the race due to the overall effects on his body which led to his development of rhabdo. That said, I tried to pay close attention to any subtle body cues or red flags, and played it safe. Still, it was a hard effort to run the same pace as the old course record, almost as intense as any race I’d run.

After Fuji, the rest of the race was a nice push through the varied trees which reminded me of running in Colorado forests around 10000 feet, which are comprised of dry lodgepole pine forests, leading up to large green moist Englemann spruce around 11000+ ft. I don’t know if these were same trees, but it sure felt like fine Colorado running to me, only without all the dirt roads that always link the good singletrack.

Many stretches were on snow patches a hundred or so feet long, but this didn’t take a significant toll on the overall time.. maybe a minute overall, as my running on snow was mostly untracked and firm, with only a few exceptions. One difficult crux of the race was the second climb up the backside of Twin Peaks, which is an ancient volcano made of loose dun colored soil, and much like running the volcanoes around Mexico city (a highly recommended adventure if you get the chance) , only in dense trees. This climb was on a 7 mile segment which seemed to stretch forever, I only had one hand bottle which I drained early after every aid station, and the course flagging was sparse. I thought I was of course and almost turned around on several occasions, as I was feeling dry and unsure.

The next crux was probably the hardest point in the race for everyone; the ascent and descent of fabled 7800 + Maiden peak at mile 55, so close to the finish but still a long way to get there. The Maiden climb is about 2800 feet feet, and for some reason never seems to end. I think I was 1-2 minutes off Erik’s time at this point, and was hoping I would be able to make it up on the backside of the peak on he descent past Maiden lake aid station. I knew I was dehydrated and had been drinking an extra 20 ounces of water at each aid station, then taing my bottle with me, but it was getting around 85 degrees and I was dry anyway.

As I cramped off Maiden peak, I knew I had some real work to do to stick to the plan, so I tried to attack the few hills on the remaining 8 miles after Maiden lake. Luckily this 8 miles is mostly fast and runnable if there is gas in the tank, and I did have a bit of octane left, as I had been pushing the Clif bar fuel hard the whole race. It paid off with 6 to 7 minutes mile pace on the smooth Pacific Crest trail, past a few beautiful small lakes behind the Willamette pass peak. Not knowing the mileage to the finish, except for one set of race photographers who said I had 3 or 4 miles left, I just kept pushing running scard that I would miss the course record. Eventually Lake Odell came into sight and I guessed I had 2 miles to go, which put me just under time to reach my goal. Out into the hot sun from the trees back to the ski area base, I finished just under CR in 7:06:51, as well as master’s CR. 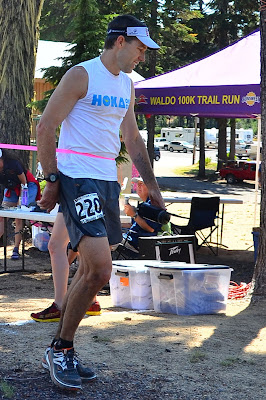 True to the Northwest, a sasquatch-like finishing pose.

The rest of the afternoon was spent as usual hanging out with like-minded trail runners who happen to abuse themselves beyond belief, watching other racers come in, enjoying the fine post race BBQ, free massage, and out-of-doors shower.

Thanks for the ride up with Clare Abrams and Scott LaFarge, and Steve and Deborah Itano drove waaay out of their way to drop me back in Novato. Thanks guys! My wife Ellen also sweetly gave me a 48 hour hall pass for the race; not an easy thing to do with two busy toddlers in the house! And Craig, Curt, Alan, and Meaghan organized the finest singletrack course (almost 100%) I have ever run.

Gear-wise, per usual I raced in the Hoka One One Bondi B.. give credit where credit's due, this shoe has had a huge hand (foot) in my season so far.. Thanks Nico, Jay, Karl and the Hoka gang! Clif products have boosted my fuel levels all year, and I have to say there is something going on in that Udos stuff that aids recovery.. I will need recovery as UROC is in 4 weeks. Okay back to your reading irunfar coverage of UTMB.