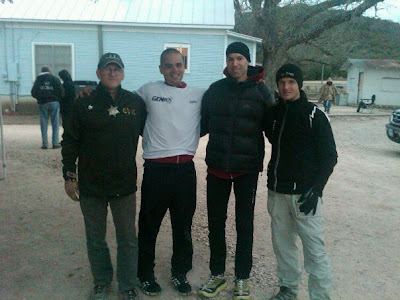 Podium: RD Joe Prusaitis, Dave James, me in my Hoka One Ones, Jason Bryant. Photo off Dave J's camera


I had been uncertain what races to run in 2011, and had thought Bandera 100K would fit nicely into an extended winter of racing. The fact that it was lately named a US Track and Field trail championship, as there would be good competition, likely excellent trails, and maybe a bit of prize money all contributed to the decision to head down. In the weeks before the race Geoff Roes had said he’d be racing Bandera..another added bonus to run against the best. 5 weeks out from December’s TNF 50 is a bit closely spaced for, but thought this was enough time to be mostly recovered.

Geoff and I traveled flew down to San Antonio to share costs and company, the drove into the cowboy town of Bandera. Before the pre race dinner we ran for 30 minutes in the outskirts of rural Bandera to get the jet sluggishness out, then hit the low-key pasta and packet pick up. Camping out made for a fun change of pace, sleeping under the stars and waking right at the race start.

Course-wise, the first section and last section of the two 50K loops are mostly loose rocks and technical, while the middle 3/5 of the race is mostly fast and pleasantly runnable, with intermittent technical sections and mild climbs. I’d biked across Texas years ago on a solo US bike tour, and remembered some areas like this, but I didn’t remember the many small scrubby hills unique to hill country. These hills are loose and rocky, with some kind of cactusy saw grass that regularly scratched the thighs. I actually love this stuff, as it is a pleasure to divert the mind from the 62 + mile distance. That’s the key to surviving ultras for me: live in the moment by enjoying the terrain, nature, and the adventure of competition.

Geoff and I had talked about a hopeful a low-key first 50K, but at the start line were Chikara Omine and Dave James, both of whom like to go out fast. When the gun went off at 7:30, Dave and Chikara and two other guys went out on silly 10K road pace, while Geoff and I hung back, not that we were planning on running together but rather we pace similarly. About 2 miles into the hills we passed Chikara, who was limping from a sprained ankle. Turns out he would drop shortly after. Another unknown guy who went out with the rabbits must have taken a wrong turn as he just disappeared in the first couple miles… hope he was found!

Overall, this first 5.5 mile section was fun as it was time to suss out the legs and body and see how things were flowing, and the running was non-painful. By the first aid station, Nachos, I felt good but knew the pace was too fast to be sustainable and wanted to reel it in a bit, and Geoff mentioned he felt the same way. We both knew Dave was going too fast for his abilities and would pay on the second lap, and I knew it was too fast to keep an even 50K split for anyone out there. But knowing that Geoff was incredibly strong these days, I thought I should stay with Geoff and it felt right anyway.

The first 25 miles of the race was somewhat uneventful overall, but what was different for me this race versus other race though was the variety of foods I ate. I didn’t keep count in the whole race but easily ate 10 Clif shots/other gel types, 1.5 whole PBJ, Pringles, cheesits, two oreos, about 2.5 bananas, pretzels, about a half liter of Coke-type product, about 25 oz of water between each aid station mixed with little Heed drink. I did get a stomach cramp for about 5 minutes from the 2 oreos, probably from the lipids. I also took 7-8 S Caps, 2 E caps, and 10 x 200 mg Ibuprofen. This is an amazing variety of junk food that would even cramp up an elephant, but for some reason my instincts were correct and my stomach and fuel levels were mostly stable throughout. I also drank a ton of water between miles 42 to 45, and was able to rehydrate the last third of the race.

Anyway, things were still fast towards mile 27 when Dave James seemed to be letting up on his eager pace, and to my surprise Geoff told me he was feeling nauseous. When you are racing Geoff Roes and he says he feels crappy, if that doesn’t put a fire under your ass, nothing will. I was feeling pretty good at that point, and when Geoff slowed his pace, then stopped to pick up a gel he fumbled, I decided to pass him and Dave and keep our same pace.

Out of the Last Chance aid station (where I took a microsip of an aid station volunteer’s beer, just for the heck of it) I felt great going up the Cairns climb, and then the Boyles Bump climb, which are decent 400 foot climbs with technical footing. On the 50K midway back at the start/finish, I noted 3:43 on my watch, knowing it was way too fast to run a negative split and knew I would be paying a price for it soon. See my splits and you can tell how foolish we three were running.

On the way back out, I saw Geoff coming down off Boyles with Dave J right behind and knew I had about a seven minute lead. The rest of the 2nd loop was the game of wondering if Geoff was going to rebound and didn’t want to let up the pace, while I was sure that Dave James wouldn’t catch me and thought he may have dropped out. I went through about three lulls in the pace until the finish of the loop, and for two of these lulls I found that the aid station soda sugar was the key to pep me up, instead of the long chain carbohydrates in gels. I had originally planned on fueling the race with primarily Clif shot gels, and maybe a 2-3 bananas and a quarter of a PBJ. For some reason Coke and the other food was the key this time around.

I did end up seeing Geoff again, not on the trails but at the last two aid stations, as it turned out he had dropped out just after I saw him at the start of the second loop. Geoff is such a cool guy that he even supports his competitors when he drops out. He came out to the easily accessible Cross Roads and Last Chance aid stations and ran a bit with me. I spent a 30 seconds too long at Last Chance as I just felt plain tired at that point. But I actually gained energy in the last 4.5 miles and ended up finishing feeling quite strong, like I could go another lap if need be. But somehow the finish line corral lured me in and I ended it at a 100K in 8:17 and a course record by an hour.

Dave James came in second about 20 minutes back, so he held together a reasonable second loop. Third was Jason Bryant from NC. For the women’s race I really had no clue what was going on, but the winner was local Liza Howard, followed by Pam Smith, and Megan Arboghast.

It was pleasant bonus to win my fourth USATF national title and run on some excellent Texas trails in a new area. Joe Prusaitis did a bang up job in hosting, and I would recommend this race to anyone considering. Also, Bandera 100K being part of the Montrail cup, I won a slot into Western States, which I am intrigued to accept. But at this point though I don’t want to pay $370 I won’t use.

Splits. Here you can see how NOT to run a race; the times differences between splits from aid station to aid station and between the first and second half of the race (51 minute difference) is astounding. I need to trust those pacing instincts and reel it in!

Overall I think this course is a tad longer than the measured 100K.

Last thing.. I am looking for a new apparel sponsor if anyone is game!